A downloadable game for Windows

A 7DFPS 2020 jam game that isn't an FPS (but is heavily inspired by games like SWAT 4 and Rainbow Six 3: Ravenshield, along with elements of Door Kickers and Hotline Miami).

Dynamic Raifus is a top-down real-time-with-pause tactical shooter, consisting of a single "shoot house" style training level. And meticulously designed shell casing physics. The highlight of the project is the squad AI system, which has the player's CPU teammates attempt to stay in formation and cover blind angles when in "Follow" mode, and can also follow player drawn lines while avoiding any obstacles in "Command" mode. Their accuracy and threat detection is also throttled just enough to keep the playthrough engaging.

This is a concept I'll definitely be expanding on later. Progress will be posted to my Twitter as development progresses.

KNOWN ISSUES
- Teammate Follow mode occasionally wonky af
- Targets/enemies always render on top of players until after theyre dead
- Paths can be drawn on top of obstacles (but teammate AI can still navigate around)
- Pathfinding to drawn paths occasionally breaks, toggle Follow via RMB to reset as a workaround
- Can only make one line for both teammates to follow
- Teammates have infinite ammo
- Teammates do not shoot over short cover
- Guns stick past walls

4. Send feedback (if you are so inclined, it would be much appreciated)

hi, can i be a programmer?

This was pretty fun! I hope to see a Swat 4-esque campaign in the future with this sort of setup 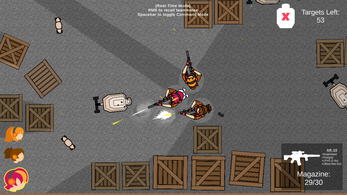 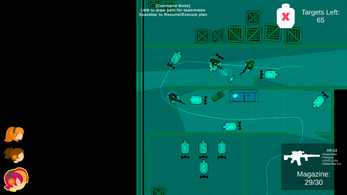 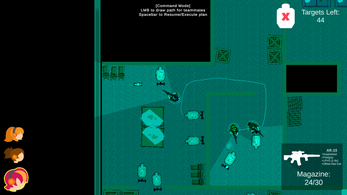 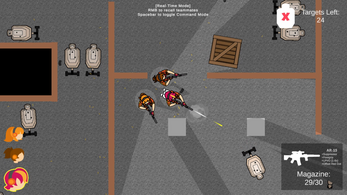 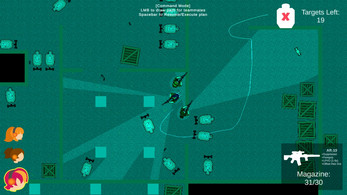